The impact of childhood cancer is still felt by Caitlin Snodgrass, 22 years later

“We are sorry but your daughter has cancer.”

After months of watching her four-year-old daughter Caitlin’s health rapidly decline, an ultrasound revealed a 10cm tumour in her stomach and Jodee heard the words that deep down in her heart she already knew but didn’t want to believe.

“How quickly those words can change everything about your world,” Jodee said. 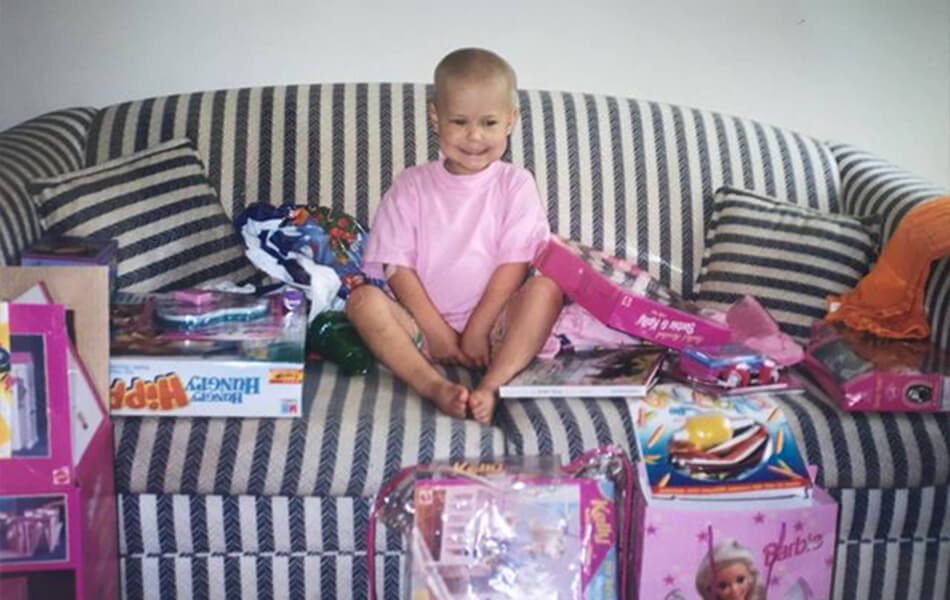 She phoned Caitlin’s dad Rod and told him the devastating news. Rod put the phone down and threw up in the rubbish bin.

Caitlin was diagnosed with Burkitt Lymphoma, a rare but highly aggressive form of childhood cancer. While this type of cancer is very susceptible to chemotherapy, the treatment had to be equally aggressive. With Caitlin so weak already, the family knew this was not going to be an easy fight. Caitlin’s chemotherapy regime was one that would knock an adult off their feet, a combination of high dose drugs all potentially lethal if her heart and kidneys couldn’t withstand them.

“It was so hard to comprehend that the very thing that could save your child’s life could also end it,” Jodee said.

“You were looking for something definitive but the doctors can’t give you that until it’s finished. I worked in a corporate environment and could fix everything but I couldn’t fix this.”

Child Cancer Foundation connected with the family soon after Caitlin’s diagnosis to offer practical advice about what support was available, both financially and emotionally. Jodee said they were fortunate they lived close to Starship so she was able to go home to rest and Caitlin was often allowed home for a few hours at a time.

“Two of the families I became close with were from out of town and I know that the help and support they received from Child Cancer Foundation was invaluable, they were a life-line for them!”

Spending months in the paediatric oncology ward, Jodee truly learnt what resilience was. “The children showed strength of character that defied their young years, they quickly adapted to days of being stuck in a bed, painful procedures, nausea and vomiting but they still smiled, sang, danced and remained children.”

Six months passed by in a blur then suddenly Caitlin was at the end of treatment.

“Everyone around us was so excited and said how relieved we must be that it was over, but I think this was the scariest time of all. I don’t know that any of us really breathed easily for the first year, every sore tummy, normal childhood illnesses would instantly bring back that feeling of fear and anxiety. Cancer changes everything, nothing is ever quite as safe again,” Jodee said.

The family moved forward in different ways so while Jodee stayed connected to Child Cancer Foundation, Rod put it behind him.

“As a dad, as soon as Caitlin looked like Caitlin again, I moved on. But just knowing the support was there for Jodee and Caitlin was reassuring, we knew they were there if we needed them, that’s what mattered.”

22 years on, Caitlin has few memories of her time in hospital but her mum tells her she was always happy. Following surgery to remove her ovary that was no longer functioning, she saw a child going into surgery who looked scared, so she told them

“don’t worry, it doesn’t hurt when they take your “offery” out.” Laughing at the memory, Caitlin says, “they were only there to get their tonsils out and here’s this bald kid suggesting they’ll have other parts taken. It must have terrified them!”

“The time, effort and love that went into making these events memorable for the children was humbling. From the volunteers to the mystery gift donors, it was a special time where we could all forget about being sick for a short while and just let the children be children, for that we were so grateful,” Jodee said.

Cancer is almost an afterthought for Caitlin now but it has affected her life in many ways over the years. She hates the smell of hospitals, doesn’t like needles and faints during blood tests. She had a lot of follow up appointments, some of which were quite confronting.

“When I was around 16 years old a doctor told me not to date a boy unless he’s “the one” because I should try and have kids as soon as possible. As a 16 year old, that really throws you and not something you want to be thinking about,” she said.

“I had pelvic and abdominal surgery and I have a 30cm scar across my stomach from each. People ask if I’ve had a C-section, sometimes I make up answers before telling them the truth. But otherwise I don’t really tell people I’ve had cancer because they can be very awkward when they find out. I’m very active with F45, dancing and cheerleading but I have no stability muscles in my core and when I hurt my lower back it was a reminder that I have reduced muscle functionality. It’s unknown whether I can get pregnant, having one ovary and the chemotherapy could have affected my hormones. I will be freezing my eggs this year. There is the fear of it complicating a relationship but I’m very straight up about it. Over the years I have struggled a lot with my mental health and I wonder if it is another late effect of having cancer as a child.”

Caitlin still has a lot of bloating and cramps so needs to have a colonscopy, gastroscopy and echocardiogram every five years. Recently she had biopsies done and a polyp removed. She was scared but mainly angry about potentially being sick again. The good news is it was very small and found early before it had a chance of becoming cancer and she now has a management plan in place.

Today Caitlin’s proud parents can see that same strength of character that she had as a child carried through into her adult life. Cancer has left its scars both physically and emotionally, but they are a part of who she is, what she has survived and has shaped the person she is today.

In support of Child Cancer Foundation, Rod took on the Tour Aotearoa in February, a gruelling 3,000 KM cycle from Cape Reinga to Bluff. He completed the Tour in 24 days raising an incredible $28,000. He also plans to continue that support by taking part in the Tour of New Zealand in April 2021.

Are you able to help children like Caitlin by making a donation today?